An unconventional tourist guide to Berlin — brought to you by someone born and raised in Barcelona, with a rather strict travel policy. 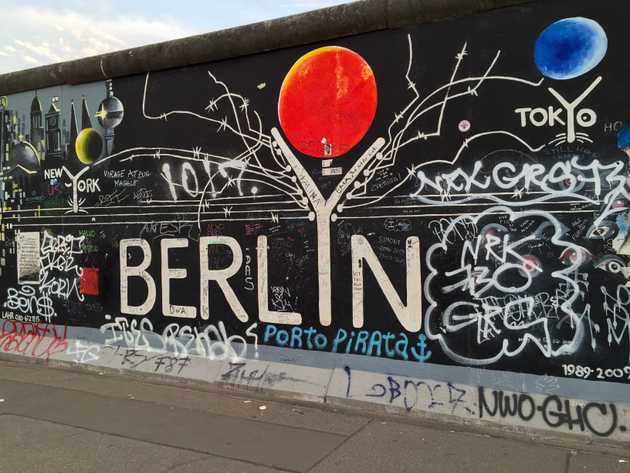 Well, what I dislike is not exactly the travel part (despite airports are definitely not my thing). What I do not like is going to a place just for touristic purposes.

In my mind, this makes no sense. People just fly to a destination in order to do things they would not usually do in their hometown. Which is not always the case, I know, but sometimes it’d be healthy to ask yourself whether you are not doing such things in your hometown because you dislike them in the first place…

(Most) tourists go to museums while unable to name three museums from their hometown (less so museums they’ve been to).

(Most) tourists visit churches just for the sake of claiming that they have “seen” them, having no historical background or curiosity whatsoever on what that church “truly means”.

I could go on and on, but you get the point.

However, I do travel from time to time. Yet I have strict policies around it. When I travel it is exclusively for either one (or both) of those purposes:

This summer, though, I wanted to try something different. I thought it would be a good idea to visit Berlin, and set a remote for our product team. Kind of a “working retreat”.

I first checked with my travel principles, and they seem to align pretty nicely: thriving startup community (we do like technology and startups, check), amazing historical landmarks (we do like history, check), plus, the Bauhaus Museum 😉, it looks like we’ve got a winner!

This post though has nothing to do with my travel policy or how cool Berlin’s startup scene could be — but it was a nice segue into this second part.

Instead, I’ve tried to recap some facts that have surprised me the most from the city. Think of this as random thoughts coming from someone born and raised in Barcelona (with strict travel rules).

The city is huge and walking distances are an illusion. Back in Barcelona, everything is at (reasonable) walking distance. You can cross the entire city in an hour. Yet Berlin’s blocks are huge! What looked to me like a ten-minute walk, usually turned out to be closer to half an hour.

Get a bike. Because of the long distances (among other things), the bike is by far the best way to move around, at least during the summer. Despite public transport works fine, the city is specially designed to ride. It is flat, has bike lanes all over the place and car drivers are aware of them. Moreover, they are not stolen! Surprisingly, you can park them anywhere and don’t worry about it. Peace of mind.

Bike lanes are sacred. You don’t dare walking inside a bike lane. Bikers get really angry about it, and they are pretty vocal about it.

Some drivers are really aggressive. It is habitual to hear car engines loudly roar at a green traffic light. They take pride showing off their cars’ power or something.

I’ve spotted an unusually high number of Teslas. To be fair, there’s also a lot of American muscle cars, both original models from the 70s and the current revised models.

Smarts can park orthogonally. I’ve seen lots of them and the police didn’t seem to care.

Uber works great. I know this is not a big deal, but back in Barcelona, the service has been banned for a long time.

Drive Now. I spotted a lot of white BMWs and Minis with Drive Now stickers. I didn’t know what that was, but two things stroke me since the beginning: cars were not average (all of them premium city cars, also well equipped) and they’ve got plenty of users since you could spot them around the city. I made some research on them and it turns out that it is a joint venture between BMW and Sixt that provides car-sharing services.

Traffic lights algorithms are suboptimal. There’s a huge overlap where both lights in an intersection are simultaneously red. Moreover, the pedestrian light goes directly from green to red without blinking or warning that it is about to change, leaving a really small window of opportunity to cross.

On the bright side, I must admit that when transitioning from red to green, on the car end, they get an intermediate state where the yellow turns on for a moment, so you know the green is coming. That was clever.

You never know in which direction a street goes. It’s really confusing because there are no marks on the road and traffic lights are inexistent on smaller streets. The best option is to go all in and try because it is usually bidirectional.

There’s no center. Once you start rambling around the city you get the feeling that there’s no such thing as a “center”. Instead, there are several centers! This is a particular manifestation of an underlying trend across all over the city: Berlin has almost two of everything. It makes sense though because after the wall fell in 1989, the city was kind of duplicated in a way.

Neighborhoods are not uniform. Usually, each district has a unique theme. This is not an exception in Berlin: you have the Turkish neighborhood, residential areas, more commercial ones… But what it is really surprising is how within the same district, the landscape can suddenly change. By that I mean, housing, architecture, street layout… you just move one street away and it seems you have changed cities.

The city feels safe. It’s pretty amazing the sense of security that the city radiates in every single corner.

There is no police wandering around. You barely see police cars on the road, neither police officers patrolling the street.

There are broken glasses all over the place. First, I didn’t understand what it was going on and blame drunk people for that. I was wrong! It’s not (for the most) that people break their bottles out of pleasure. As it turns out, you can get (some) money back from your empty bottles. The broken glasses are just there because some people leave them in the street (with good intentions, so other people can grab them and earn the thing), but an unexpected event broke them before. Large numbers at play: leave a lot of bottles in the street, inevitably, some of them will break.

You can smoke inside some places. At first, I could not believe it, but some venues, such as restaurants or bars, allow their customers to smoke.

People makes a lot of outdoors living. At least during the summer. It’s remarkable the number of people and the variety of activities people do outside. Barbecues, yoga, read clubs, board games… the preferred spot for those is usually their huge parks.

Parks are H-U-G-E. The amount of green area the city has dedicated to public parks is mind-blowing. One that I particularly liked was Tempelhofer Feld: a “real airport” (yes you hear that right, where planes land and stuff) where you can run, bike or whatever you want to do in the same runways airplanes maneuvered.

Respect for historic events. Praiseworthy how the city has preserved and celebrated the remaining pieces from the war. Sure no one is proud of what happened, but they hold onto it to show future generations what was really like.

Memorial to the Murdered Jews of Europe. The most amazing monument I’ve ever, not seen, but actually lived. It’s brilliant how the architect captured and recreated, inside stark, plain concrete blocks, the sorrow jews experimented during the nazism.

There are a lot of bees. Back in Spain people are afraid of them, I mean, not without reason, they can bite you — and it hurts. Here people have learned to seamlessly live with them. You get used to having them around.

People party all the time. (At least during the summer) there are outdoor clubs, pubs, spontaneous gatherings on the street, even after hours parties running all the time.

People is eating all the time, too. Maybe because of the mix of cultures, eating times overlap with one another and this translates to busy restaurant tables at any given time: you’ll never know if they are having lunch, dinner or the thing in between.

Small business thrive. Although I don’t have the data on how well they actually do, there’s a huge amount of small shops and retail that you don’t usually see in other cities.

The city is home for lots of cultures. There are literally people from all over the globe. Despite, locals don’t speak the great English northern countries are known for.

There’s not that much work. (Outside the tech world) if you don’t speak German, there are not that many options for you in Berlin. Otherwise, if you happen to be a software developer, you are more than welcome.

It is cheap. (If you go to the right places) the city can be cheaper compared to the rest of the country. Notwithstanding the touristic places and the most commercial areas will quickly prove this statement wrong.

No credit card. Only the fancy restaurants and “premium” business will accept credit cards. Bring cash for the rest.

The sun raises early. But not Spain-early, the first day I woke up at 5:00AM because the sky was already plain blue. Roll the curtains to avoid waking up by the sunlight. I was told that winter is the other way around.

Big windows. Northerns love light. Windows are huge and I haven’t seen a single one with blinds. First floors don’t have fences, which also relates to the security thing.

There are no elevators in residential buildings. If you want to go up, take the stairs.

No air conditioning either. Which makes sense though, because it’s hot for 2 weeks a year.

Many apartments don’t have living room. The epicenter of the Spanish home, the living room, is somehow removed from some apartments. I even found some kitchens with the bathroom inside, which I found at least curious.