Making product decisions is hard. The moment we choose, we are making implicit decisions and exposing ourselves to be wrong. We are all afraid to be wrong, but not deciding can set you up for a way worse outcome down the road.

It’s been just a couple of months since we released the iomando API and we couldn’t be happier with its reception among developers. Beyond the four launching partners, we are already in advanced conversations with more than a dozen potential integrators that will roll out its product featuring the iomando API by the end of the year.

Along these lines, I wanted to share some thoughts about the unexpected consequences derived from the release of the iomando API. More precisely, the tensions that arise when you develop two products that are not perfectly aligned in their end goals.

From the very beginning, we understood that releasing an API we were rooting for the creation of a platform where third-party developers could build on top of. A horizontal strategy of sorts. On the other hand, our core product is not chasing third-party developers, instead, it is looking to sell our “packaged solution” to an end customer. Here we’ve been pushing for a vertical strategy for almost two years.

Like it or not, pursuing both a horizontal and a vertical strategy at the same time will eventually cause some friction down the road. This is not a new thing. We’ve seen these dynamics play out countless times. Even well-established companies like Microsoft struggle when it comes to balancing priorities between its developer platform and products such as Windows.

We knew this one was coming. Nevertheless, we chose to turn a blind eye to the problem and hope for the best. Maybe the business gods had a different path prepared for us, one where horizontal and vertical can happily thrive together.

And from the outside, one might think: “what an curious way to manage products you guys have at iomando…“. And you’d be absolutely right. Looking back this ranks among the poorest product decisions we’ve made so far because we agreed not to decide at all. But more on that later, let’s focus on the problem first.

How We Ended Up Here

During the last year, iomando was growing faster than we could have never imagined. Growth itself attracts new opportunities, some of them are good and worth pursuing, others will only distract the business. The iomando API came in as a new opportunity we could explore on top of our main business. It might have potential, but still unproven success.

The team liked the idea from the beginning and some customers were already showing their interest to implement it. The product was somehow selling before it was even built.

But the iomando API brought a misalignment with our core product. A recipe for losing focus. And don’t get me wrong, I’m not against coming up with new product ideas. At iomando, we do it all the time. It is the path to growth and also a synergetic strategy with existing products that will probably reinforce the overall value proposition. But tensions arise when such products are not strategically aligned with the overall company vision.

The Consequences of Not Choosing

Not deciding is a decision by itself. It means not only postponing a painful choice, but also setting yourself up for a path of sustained future suffering, and it is only going to get worse.

The first principle is that you must not fool yourself and you are the easiest person to fool.

By not making a choice, you can fool yourself by thinking that you just spared yourself a decision. But you just ignited a chain reaction that will follow you down the road.

However, if all this stuff is well understood, why don’t we choose in the first place and save ourselves from the future suffering? Well, I’m not a psychologist, but I’ve come to realize that when you are faced with an either/or choice, the most “human” thing to do is to keep both. Although that’s not choosing at all.

Choosing is hard. Because when you choose, you make decisions and expose yourself to be wrong. We are afraid of being wrong. We derive more pain from negative emotions than joy from positive ones. It’s an asymmetric reward mechanism, hence the default mode is to hold on and remain still. 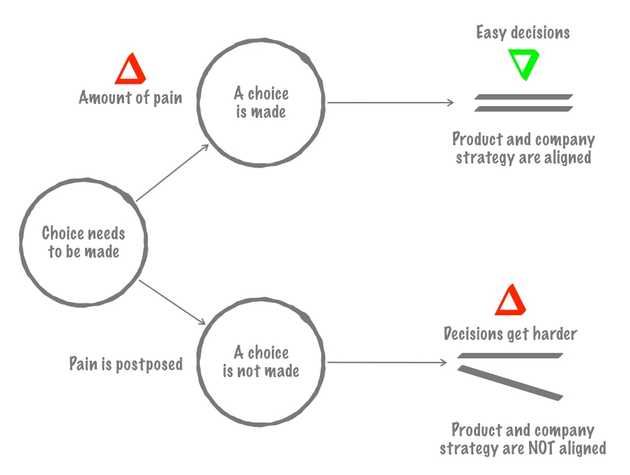 Here is where the unexpected part kicks in.

As we mentioned earlier, once you’ve decided not to decide, you might have avoided a high dose of a “one-shot” pain. However, you just “subscribed” to a long term series of uncomfortable small cuts.

You have exchanged one-time, acute pain, for recurring suffering.

Because once the choosing moment has passed, more decisions will still need to be made. If you’d chosen to say “no” in the first place, your decisions would now be clear, and straightforward. Your incentives would be aligned.

Your choice could still have been either right or wrong. With the available information, there is no way to know. But at least the decisions you’ll face down the road would have aligned incentives. And when incentives are clear, decision making is rather easy. 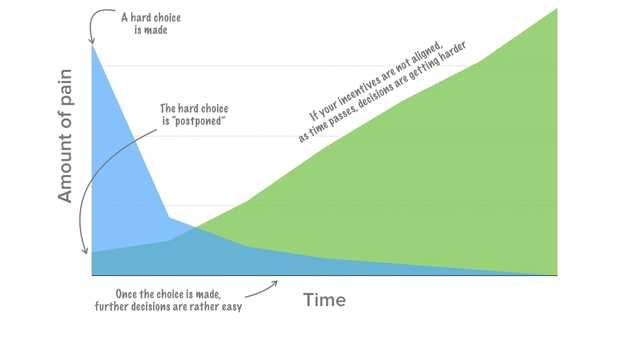 But if you haven’t chosen in the first place, more decisions that need addressing will eventually come anyway. And here is when the recurring suffering comes into play: after a won’t-do-decision, whatever you decide next will certainly be wrong. Because your product goals won’t be no longer aligned, so decisions will revolve around suboptimal choices. You will be paying the price of not deciding.

Mistakes Will Be Made, But That’s OK

The next and final phase of the won’t-do-decision framework is paralysis. Not choosing is only about postponing decisions, remaining quiet rather than going forward.

Making decisions will expose us to failure. Mistakes will be made, but that’s OK. That’s good thing actually. Because it also means progress. If we break something… good, we’ll fix it. Then we’ll learn and grow as a team, as a company.

Don’t obsess about not making mistakes as we did. Mistakes are going to be made. Just don’t make it a habit. Try to avoid them, learn from them, but recognize that you’ll inevitably make some. If you are not making mistakes it’s because you are not trying something new. If you are really pushing the envelope you will bump into problems, hard choices will arise. But when your vision is clear and your incentives are aligned with the overall vision, making decisions will become rather easy.